In previous reviews we have compared the relative heavy-weight IP/PBX cloud based service providers against much smaller competitors however in this review they will go head to head with opponents their own size.

RingCentral frequently comes out on top of the charts in IP/PBX reviews but Virtual PBX is never far behind, so what separates them? Furthermore, which would be the best solution for your business?

Virtual PBX is up there competing with RingCentral for the lucrative SMB to large company market sector. Their service plans are priced competitively and boast a wide array of features and functions that would be the envy of most large-scale IP/PBX service providers. Furthermore, Virtual PBX’s business model is to provide full functionality across the board with the difference in service plans being the amount of free minutes. However, price is not always everything, as so many attributes need to be taken into consideration when purchasing services from a hosted IP/PBX system. Subsequently, we will consider the virtues and flaws of Virtual PBX in a directly comparable head-to-head with its lauded competitor RingCentral.

RingCentral Vs Virtual PBX is always going to be a close scrap so let’s see how we can differentiate between the two services.

RingCentral has two main products that interest us and are directly comparable to Virtual PBX services, namely Office and Professional. To elaborate Office is a cloud based IP/PBX service as you would expect targeted at Office based businesses. The Professional service is actually geared towards a Grasshopper, virtual telephone service aimed as incoming call management for small to medium businesses. The RingCentral Professional range has been designed to support SoHo and entrepreneurs’ working their businesses from their mobile phones. This is comparable to the Virtual PBX system, Anywhere – so let’s start there.

The Dash price plans are:

All options come with no activation charges. There is in addition a 30-day free trial with an included 50 free minutes. Overuse minutes are billed at 0.5C for Virtual PBX. 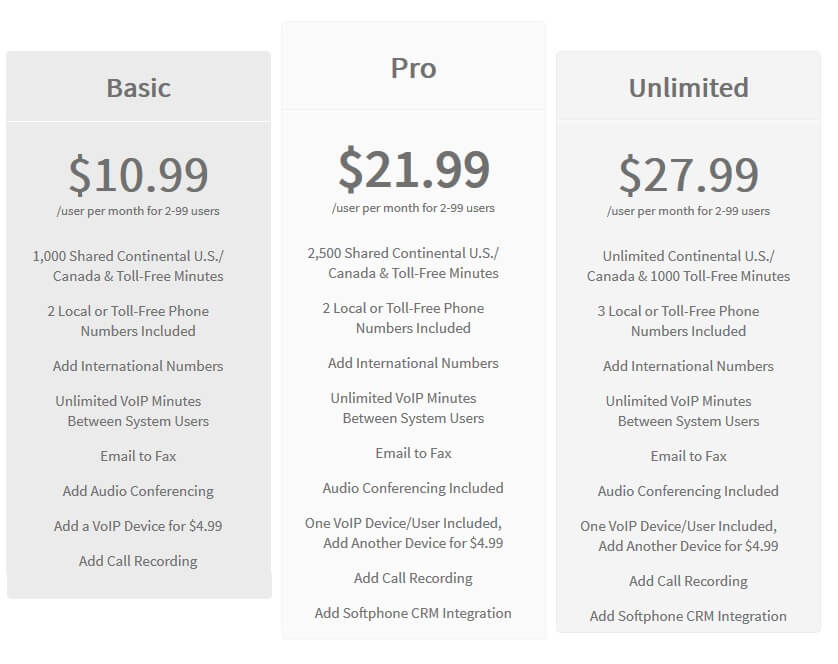 Probably the most directly comparable products are the virtual inbound telephone services, Professional and DASH. As such, it is no surprise to see both that RingCentral and Virtual PBX has almost identical price plans. Furthermore, the way their products work is the same generic inbound virtual answering service model.

Both products handle incoming calls by providing local and toll free numbers and then using an auto attendant to answer the calls before forwarding them to a mobile or landline number. This is a very popular business model for entrepreneurs and those whose business takes them out of the office as they work predominantly from their mobile phones.

RingCentral operates a flat rate regardless if the customer has a contract or not, so the prices listed in the plans apply to everyone even month-to-month businesses. Virtual PBX unfortunately only offers the best prices to those on 2-year contracts.

Another key differentiator is that although they both come loaded with features, RingCentral’s features come inclusive of the price. Virtual PBX on the other hand charges extra for some of its features. For example, these features are extra with Virtual PBX but come included with no extra charge with RingCentral:

When considering the feature sets of both these products there is very little to separate them. The exceptions being Virtual PBX has probably the better range of features for a business hosting a call center as it can support real time monitoring and true ACD queuing. On the other hand, RingCentral has better integration tools for Outlook, CRM and Box, with Virtual PBX only supporting Dropbox.

It is extremely difficult to separate these two on price or features, though RingCentral has the better more flexible contracts (no contract and no cancellation fees). With Virtual PBX there are several hidden charges that need to be looked at closely when considering a quotation, RingCentral’s pricing is all inclusive. One other potential issue is the grey area of acceptable and reasonable usage. Virtual PBX is very clear on this and once you go over the threshold you are charged over-usage rates. RingCentral takes a more confusing but pragmatic approach as it compares your usage against all its other customers’ usage patterns, if you are over the 75% upper boundary you may be deemed an excessive user.

The only other very important considerations are support, quality and reliability.

The difference in support is primarily RingCentral has its customer support hosted offshore whereas Virtual PBX has its call center in the USA. On quality and reliability, both services are high-end carrier class services with 99.999% availability.