In this in-depth comparison, we will look at two of the leading virtual telephone services for small business, Phone.com and the pioneer of virtual PBX systems, VirtualPBX. Both of these services have undergone radical changes lately as their services and the market have had to evolve to cater for a more mobile clientele. Phone.com has their root in a strong residential base and has over 250k + business customers. They have though migrated towards targeting the small to medium business (SMB) through their newly enhanced virtual telephone service which boasts over 40+ features on its hosted cloud PBX system. On the other hand, VirtualPBX as a pioneer of the virtual IP PBX going back to 1997 already has huge commercial experience in managing hosted PBX solutions for medium and enterprise companies but that notwithstanding VirtualPBX has also gone through major changes to their cloud hosted PBX service again leaning towards the lucrative SMB market.

Both these companies are now chasing the same customers and trying to gain market share in a difficult and competitive arena. Who will come out on top? 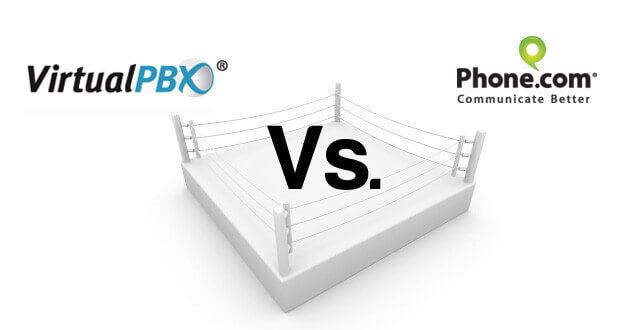 Phone.com has revolutionized their approach to the business over the last few years moving their focus from the SoHo (small office home office) clientele to the small medium business (SMB) market segment. The markets and the service requirements are radically different so how have Phone.com coped with transforming their service from a virtual incoming phone handling service to a fully-fledged cloud hosted PBX. Fortunately for Phone.com the transition has not been too painful as they already boasted an array of 40+ VoIP features that made them one of the most competent virtual telephone services around. Hence most of the required SMB features and functions were already in place or simply required upgrading. One such area was in supporting mobility and Phone.com has now introduced the obligatory mobile apps that are a requirement in today’s SMB market as well as a smartphone for computers. However where Phone.com has really made significant changes is in its underlying business model by switching to a new set of service plans more in line with the SMB market. Hence the reason that Phone.com has bundled nearly all of its features into one feature-rich set which is shared across all price plans. This is quite a common tactic for cloud hosting companies as they then only have to support one set of features and functions and can upload and upgrade much easier than if they supported two or three sets of features. Consequently, Phone.com how is basing their business model on providing a feature rich service at a competitive monthly per seat price differentiated across the Base, Plus and Pro plans only by the included minutes.

VirtualPBX previously went after the small business, entrepreneur and SoHo market with their Anywhere product, which was a capable but lightweight virtual telephone service for handling incoming calls. In the last few years though VirtualPBX seems to have stopped pushing the Anywhere service in favour of their hosted PBX service labelled Dash. This change in business model means that they too are aiming their sights at the larger businesses in the SMB market that require a different and more technical telephone solution. VirtualPBX have responded to this by devising their three tier DASH service plans to cater for the lower end of the SMB market by segmenting their feature sets to address businesses of particular size. For example VirtualPBX provides a large common feature set across all plans but assigns some features such as CRM integration and Call blasting only to specific plans.

VirtualPBX also has a flagship hosted PBX service labelled Office which is targeted at the larger SMB market though a lot of the features sets seem to be common to both sets of price plans. However, VirtualPBX has priced the Office plans on a per extension bases, with all calls being unlimited and all plans sharing the same features, as we will see later.

The difference between Dash and Office can be best demonstrated by reviewing their features. Dash has an extensive feature set for the price and it supports all the necessary functions such as an auto-attendant, custom greetings, and IVR, advanced call transfer and all the inbound call management functions you would expect from the virtual telephone system that it was replacing. However it does have many convenience and efficiency features such as Flexible Device Management, Do-Not-Disturb, Follow-Me Calling, Outbound Caller ID, Call Blasting, and Hot Desking as well as voicemail boxes for a DID, Auto-Attendant, or a Ring Group and Voicemail Notifications. There is also the standard choice of local or Toll-free numbers and Secure Teleconferencing and simple three-way calling.

Office on the other hand has a larger portfolio of features aimed at the larger business such as in addition to those supported by Dash, advanced call routing and queuing, conferencing, call/contact centre features and advanced call management and reporting. And in this respect VirtualPBX’s Office is more advanced that its sibling Dash and for that matter Phone.com’s hosted plans.

Of course it all depends on what you are willing to spend and which is the best value for money.

So what about the price plans?

Both Phone.com’s Plans and VirtualPBX’s DASH are excellent virtual telephone services for the SoHo, start-up and SMB. They both have feature-rich products that match the requirements of most small businesses. There price plans are affordable with both having low additional call rates, circa 4.9C though Phone.com probably edges it on features and value for money.

Phone.com has one of the lowest month plan rates and it comes with great features however, VirtualPBX’s Office is far more advanced and has great features, a good price and a future-proof upgrade path.

Alasdair Gilchrist
Alasdair is a technical writer with interest in business practice, operational strategy, start up philosophy and affordable technology. He lives in Nonthaburi, Thailand with his wife and daughter, and writes terrible novels as a hobby.